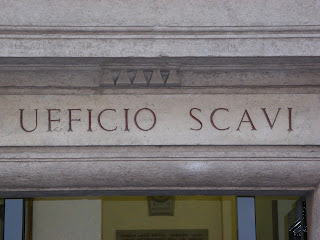 Visiting St. Peter’s Basilica is an unforgettable experience. The Holy See’s website has now placed a virtual tour of the historic Vatican Necropolis and Tomb of St. Peter. Those of you who have been on the Scavi tour will recognize the ancient streets and burial tombs below the basilica. The interactive tour provides the history and explanation of each of the mausoleums on the tour and ends at the awe-some tomb of St. Peter.

This interactive site will be excellent for any Church history teacher. It is perfect for lessons on the fate of St. Peter, the persecutions of Emperor Nero, the transition of Christianity during the reign of the Emperor Constantine, or the history of St. Peter’s Basilica itself. If possible, take the students to the computer lab and allow them to explore the Scavi tour themselves. You may use/adapt the following “Scavi-nger Hunt” for them to complete as they explore:

1. Who constructed the original basilica above St. Peter’s tomb?
2. During whose reign was the Fannia Redempta Mausoleum built?
3. What is the floor of Mausoleum C made of?
4. What was the first mausoleum to be discovered during the excavations of the necropolis?
5. What is pictured on the front of Valerinus Vasatalus’s sarcophagus?
6. What Roman gods are depicted on the floor of Mausoleum I?
7. Which mausoleum is the only one entirely Christian?
8. How did the Christians in that mausoleum dress Christ?
9. The picture of Jonah swallowed by the whale is an allegory of what?
10. What does “Lucifer” mean?
11. Where did “Field P” get its name?
12. What is important about the “Red Wall?”
13. What is below the “Trophy of Gaius?”
14. How many altars were built above the Constantinian Memorial?
15. What are the two popular interpretations of the graffiti text confirming the presence of the tomb of St. Peter on the Vatican Hill?